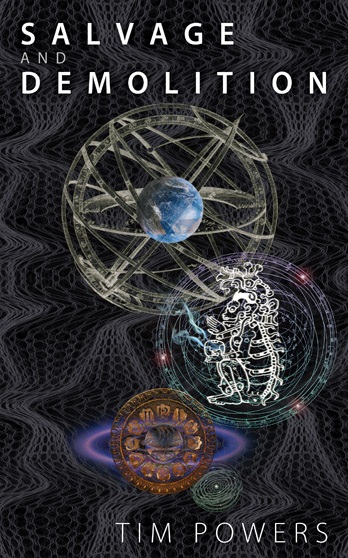 Salvage & Demolition is a lot like a novel I read last year, The Shining Girls. The difference is that novel was terrible and this one is not.

Few writers are as adept as Tim Powers at telling stories about really difficult to understand concepts and making them palatable and compelling. In this novella, Powers tells the story of Richard Blanzac, a rare books dealer, who is caught in a time loop after coming in to possession of a box of writings from a long forgotten beat poet named Sadie Greenwald.

Salvage & Demolition is a short book and to say any more would give away too much of the fun. I’ve been a fan of Tim Powers for years but he has a tendency to scare me away. He deals in esoteric concepts that seem perfectly reasonable while reading but then trying to explain to someone afterwards makes you feel like you took crazy pills.

One of his more famous books is Last Call, a simple story about a Las Vegas gambler going after that last big score. To win back his soul from the Devil. In order to be the next Fisher King. And follow in the footsteps of Bugsy Malone. I think. Trust me, it’s a great book. But it’s freaking dense. Publishers don’t seem to know what to do with him either. The jacket copy on his books describe plots that are pretentious and eccentric. But when reading that’s not the feeling you have at all. You buy in to Powers’ world immediately. He’s a tremendously good story teller and you feel smarter after reading him.

If you are a fan of smart fantasy and science-fiction I highly recommend checking out some of his books at your local library. Incidentally, Powers wrote a pirate epic called On Stranger Tides that became the basis for the 4th Pirates of the Caribbean movie. After reading the book, I wish they had just filmed the book because it’s a hell of a good adventure story that didn’t need Jack Sparrow swanning around to hold interest.