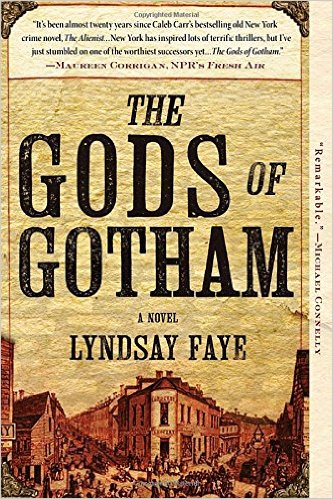 Lindsay Faye’s extraordinary The Gods of Gotham is the best novel of its kind since Caleb Carr’s The Alienist. This isn’t a unique observation, it’s emblazoned across the cover of the novel. However I agree with it. I love big city historical fiction so taking a serial killer thriller and setting it in New York City in 1845 is always going to draw my interest. Faye goes a step further by making the origin of the New York City Police Department, and beginning of the “copper stars” that patrol the streets, as crucial story elements. The Gods of Gotham is at once a terrific mystery thriller and a rousing drama bringing to vibrant life the rough and tumble times of NYC in the 19th century.

Leading us on this journey is the ex-bartender Timothy Wilde. He is conscripted nearly against his will by his towering and unscrupulous brother, Valentine, to be a copper star when he is in need of a job after a fire devastates Manhattan. Around this time the potato famine was devastating Ireland and the Irish were fleeing their homeland to find a new life in America, and anti-Irish hostility was rampant especially toward their idolatrous and heathen Catholic religion.

This racism and intolerance toward the Irish immigrants is a vital thread throughout the novel. Protestants, the reigning religion of the day in New York, believe the Irish Catholics to literally following the anti-Christ, the term they adopt for the Pope in Rome. Charities for poor Protestants want nothing to do with the Irish and as more and more Irish come to New York the situation worsens.

All of this is backdrop for the adventures of Tim Wilde and the other “coppers”. One night on his rounds Tim collides with a blood soaked 10 year old girl named Bird Daly. Tim takes her home and Bird tells a horrifying story of murdered kinchin mabs (child prostitutes) in the brothel where she lives. Bird leads Tim to a burial ground in rural Harlem where they find 19 corpses of mutilated children. His send of injustice inflamed, Tim starts investigating the crime and stopping the mad man responsible. A task made all the more difficult when rumor leaks to the local papers that an Irish madman is killing kinchin and the simmering tension in the city explodes into full blown riots.

A colorful cast of characters weave in and out of the narrative helping and hindering (and in some cases both), Tim as he desperately tries to find and stop the killer before he strikes again. The most important are his brother Val and the charity worker, Mercy Underhill. Val is a scoundrel as well as a Captain in the NYPD with Tim, but his allegiance lies with the Democratic party and protection of their status in the city, doing whatever it takes to keep that status. Mercy is the inscrutable object of Tim’s unrequited affections and their relationship is one of the most interesting elements of the novel. As the story unfolds and Tim and Mercy start to learn more about each other their secrets come out. In one devastating scene Faye lays each character bare. It is here her attention to character shines brilliantly as both people are faced with the truth of their relationship. Without going in to specifics, it’s a powerful twist on the manic-pixie-dream-girl trope and Faye subverts everything you, and Tim, thought you knew about Mercy.

Faye uses the historical backdrop to striking effect, taking her mostly fictional cast and thrusting them in to the middle of historic events that helped shape the city we know today. The story moves quickly and the life and times of city life circa 1845 is explored but never in a way that it feels like a lecture. If there is one complaint I have, and it’s a small one, it is that everything fits together almost too neatly when it’s done. Still, The Gods of Gotham is a mystery at heart and the reader expects resolution, which you get. I wish it hadn’t been quite so tidy an ending but it works well and is a thrilling and satisfying conclusion.

I look forward to continuing the story of “copper star” Tim Wilde in the already published Seven for a Secret and the series finale, The Fatal Flame.

CRITICULT – Telling you what we think since 2003. The Gods of Gotham – Lyndsay Faye
%d bloggers like this: