I am so over zombies.

What the hell it is with zombies? I realize they can be used as a narrative metaphor for everything from rampant consumerism to voyeurism to socio-political homogenization to straight up mass murder. But perhaps the most obvious metaphor for zombies is the way people can’t run fast enough to avoid skinning their knees jumping on that goddamn zombie bandwagon. So imagine my complete and utter lack of surprise when it was announced that Max Brooks’ renowned novel – World War Z – was being made into a major motion picture starring the hunkiest hunk in the history of hunks, Brad Pitt.

Director Marc Forster, best known for the outstanding Monster’s Ball and the significantly less outstanding Quantum of Solace, brings Brooks’ novel to life with a surprising amount of grace, restraint and poise. If you had to guess how a film about the Zombie Apocalypse began, would you say “making pancakes with your loving family on a warm sunny day”? Well this one does and I have to admit, it caught me off guard. Gerry Lane (Pitt) – is making pancakes for his loving wife and two adorable daughters inside their cozy love nest while watching the Third World tear itself apart on television. Lane was once a high ranking problem solver of sorts for the United Nations but now, he makes his hay making breakfast. Deep diving into the hottest hot spots on earth no longer appeals to him, because now all he wants to be is a family man. Well, that and the UN apparently has the best pension plan EVER. 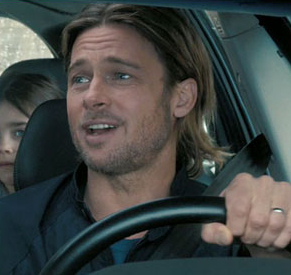 For Christ’s sake, Gerry even takes the time to play with his kids when he gets up in the morning!! Isn’t family special? And isn’t it Especially Special to Gerry Lane, a character so noble and pure of intent that even now, Tom Clancy is touching himself?

Message received. So, on their way to a family outing somewhere in downtown Philadelphia, Lane and his family find themselves at the epicenter of a massive undead invasion. Perhaps ten minutes in and all humanity – along with Gerry’s Neo-Rockwellian wonder-life – are shattered forever. The film never tells us where or how the infection started, but before you can say “Donovan McNabb sucks”, the historic streets of downtown Philly are overrun by the sprinting dead.

Quick thinking Gerry manages to whisk his family to safety, displaying the kind of incredible warmth and compassion you normally only associate with people named Rex McDasherson. As a result, team Lane finds themselves rooming on an aircraft carrier/floating refugee camp somewhere in the Atlantic, courtesy of Gerry’s big shot former boss at the United Nations (Fana Mokoena).

And hey, isn’t it funny how in the movies, the United Nations is always WAAAAAY more powerful than it is in real life? Just saying.

Anyway, it turns out that…somehow…the government has concluded that Patient Zero (cue ominous music), the source of the zombie infection, is in South Korea. It’s one of those “so stupid it almost kind of makes sense” things movies like to do to us. It’s kind of like the way James Bond always gets captured and accidentally stumbles onto clues while he’s face down in some Russian girl’s tits obviously makes him he world’s best detective. Thankfully, World War Z moves past this quickly, and instead focuses on Gerry’s status as a Third World Indiana Jones, and how this makes him the only one who can find the cure for zombie.

Because this is obviously how diseases work.

Gerry lands in South Korea with a team of commandos and the World’s Most Adorable Doctor (Elyes Gabel), who seems confident they’ll find Patient Zero (dum-dum-duuummmm) so quickly they’ll be back home in time to not laugh at Jay Leno. Spoiler alert – it doesn’t go so smoothly and before you know it, everyone in North Korea has their teeth pulled, and Mr. Pitt’s rugged, tan as baseball leather mug has rushed off to Israel, just like Rex McDasherson would. There, he expects to find the second in a string of very linear, surprisingly predictable A-to-B-to-zombie plot points that all go down as smooth and unremarkable as a dairy free milkshake.

At each stop on his globetrotting adventure, Gerry also assembles a crack international supporting cast of disposable and not-so-disposable sidekicks. Together they execute many high energy, competently shot and executed, modestly entertaining but never very memorable excursions into zombie territory. They run, jump, leap, crash things, shoot guns, tiptoe, deduce and occasionally emote their way through a film that is, in almost every conceivable way, totally adequate. That’s right. What I’m really trying to say is…wait for it…

World War Z Was a Movie.

It wasn’t great, and it wasn’t terrible. It just WAS. World War Z feels like you’re watching someone ELSE play a really short single player campaign in a Call of Duty game. Add to that a curious lack of theme – the subject matter and tone of this movie makes it feel like there’s definitely an underlying platitude here somewhere. But damned if I can find it. In fact, before seeing World War Z I’d listened to a coworker carp about how much she hated World War Z, because “there was no point to it”. Of course, this person’s idea of good zombie drama is The Walking Dead, which people who give a shit about zombies tell me was good for one season.

Still, I dismissed her complaint as a lazy minimization. But although I’d prefer to say the film “lacks an apparent theme”, I can definitely see what pissed her off. And I’m not being a snob – just because you or I can’t identify what the point of a film is supposed to be doesn’t mean there isn’t one. It’ just that aside from a vague, cloying “we can pull through anything if we all pull together” thing, there’s very little reason to remember World War Z, and even less reason to take anything away from it. And despite being a more or less  tolerable experience, the film ends on a maddeningly inconclusive note, one that will leave many of you thinking:

But that doesn’t mean there’s no point, per se. You paid hard earned money to sit still for 116 minutes and be entertained, didn’t you? And were you not entertained? I can’t speak for anyone else, but yes Maximus, I was definitely not…not entertained. World War Z didn’t change my life; in fact it didn’t even make me feel better for the time it took me to sit and watch it. And the fact that I had to write an article about it is the only reason I’m going to remember anything about it two years from now. It’s literally the cinematic equivalent of eating at an Applebee’s and not getting food poising. You managed to eat a competently prepared, totally unremarkable meal that was purchased for a reasonable price, and you did not die in the process.

Congratulations. You have successfully eaten “food”.

Or in this case, watched “a movie”.

CRITICULT – Telling you what to think since 2003. World War Z Was a Movie
%d bloggers like this: