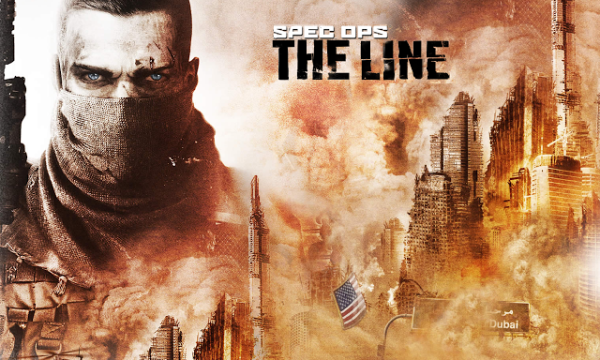 There is a part at the end of 2K’s stunning game Spec Ops: The Line where you find yourself in a penthouse suite high atop the Burj Khalifa skyscraper in Dubai. If you wander around a bit you can go out on the balcony to survey the city. What you see is an apocalypse begun by a cataclysmic sandstorm but finished by your own hand. Buildings are aflame, the night sky glows red with their fires, and your path of destruction is visible for miles.

You know the places you have been in the city because they are on fire.

For years video games have tried with varying success to make changes to the game environments “permanent”. Meaning the player’s actions in the game have a lasting effect on the levels, whether that is a scattering of bodies, bullet holes, destroyed buildings, or any other action that can change a surface. This burning city seen from far above on the tallest skyscraper in the world is one of the most effective examples of permanence in gaming. It is impossible to look out at the ruined city and not think, “I did this.” Yes it is a fantasy world and none of it is “real”, but still that thought lingers.

Spec Ops: The Line does a brilliant job of making the player’s actions resonate long after the last bullet is fired. On the surface, The Line is a generic 3rd person military shooter. Six months ago, Dubai was decimated by a cataclysmic sandstorm. The 33rd battalion, under the command of Colonel John Konrad, assisted with the evacuation of Dubai’s citizens. When they were given the order to abandon Dubai they refused and went AWOL.  Soon all contact from Dubai was lost and the rest of the world abandoned the city. Two weeks ago a radio transmission was heard from Dubai stating the evacuation ended in total failure. A trio of Delta operatives are sent to Dubai to find signs of survivors and then radio for evacuation.

The player takes control of Captain Martin Walker (portrayed by voice over superstar Nolan North) and along with squad mates Adams and Lugo you investigate the fallen city. The first few chapters are standard learn-to-play-the-game levels with your team encountering Arabs that are shooting to kill. As the game progresses, Walker, and the player, realize there is more going on in Dubai than you were first lead to believe and you come to find out the 33rd has taken control of the city. Soon you are caught in a civil war between the CIA, rogue 33rd, and the insurgents.

Look, I know the above description sounds like standard military shooter plotting and is in no way surprising. Where The Line really deviates from the expected is how it makes the player feel about the violence they are inflicting. When the game begins Walker and his squad react to firefights with professional detachment. Shouts of “Target down.”, “Target eliminated.”, “Taking fire!”, etc are all heard during the battles. However as the game progresses the experience begins to wear on the soldiers and is seen in both their appearance and language.

“Target down!” becomes “Got the mother fucker!”. “Taking fire!” becomes “Get these fucking assholes off me!”  Calm detachment becomes much more personal and blood lust takes over. Your soldiers become covered in dirt and blood and as the situation becomes more desperate their professionalism evaporates. Adding to this degradation of your character are instances where you can’t be sure what you are seeing is real. Even more striking, you start to doubt the very reality of what you are experiencing. Load screens in the beginning have your standard gameplay tips. As the game goes on these tips are replaced with critiques of shooters in general and the player. One memorable one is “To kill for yourself is murder. To kill for your government is heroic. To kill for entertainment is harmless.” I found myself with a growing sense of unease.  Just what is really going on with this game and do I want to go where it is leading?

The writers and designers of The Line masterfully manipulate the player in the early stages by presenting the game as a standard Call of Duty style shooter. This standard narrative is then cunningly turned on its head, leaving the player at a disadvantage and a growing sense of unease that things are really not as they seem.  The Line doesn’t shy away from showing the damage the player is inflicting. One horrific sequence specifically will likely haunt the gamer for some time.  The game has 4 endings, all somewhat similar, but the developers have said there is a fifth ending; the player can put down the controller and stop playing. This isn’t a flippant response either. There are times the game did make me question why I was continuing down the path the game had put before me. My rationale was I wanted to see how it ended. And I’m glad I saw it through, but man this game will get under your skin.

For anyone that is a fan of shooters you absolutely must play The Line. In fact, those of you that don’t like shooters should play The Line as well. The game is as close to a philosophic deconstruction of our obsession with shooter video games as we are likely to see this generation.

I recently started Infamous 2 just after finished The Line and I have found that I am playing the game differently than I would before The Line. Infamous 2 allows you to incapacitate most enemies rather than kill them. I’ve found that when I accidentally kill an enemy I have a moment of pause when I stand over their body and realize they are dead. It’s a strange feeling, and one I have to attribute 100% to my experience playing The Line. When a game is so striking and memorable it affects how you play OTHER games that is a significant accomplishment.  Do yourself a favor and don’t miss The Line. It is a gaming experience like no other.

Spec Ops: The Line is available on PS2, Xbox 360, and PC. All images copyright 2K Games.

CRITICULT – Telling you what we think since 2003. Spec Ops: The Line (RATED M)
%d bloggers like this: