By Jack ‘Bought it for a Dollar’ Burton

Hi internet. It’s me, Jack. Yes, we’ve tangled before. So, I hear a lot of you have a problem with the first RoboCop trailer. In fact, I’ve heard a lot of hate spewed from a lot of Cheeto-filled mouths for a lot of days now about this. Most of the complaints I’ve heard go a little something like this:

“His suit isn’t the right color”

“It’s rated PG-13! WTF! RoboCop is supposed to be about the violence!”

“Who the hell is Joel Kinnaman?”

Look, everyone. I remember the original RoboCop just as well as you do. The day it opened, my best friend and I sneaked in to see it when it opened. It came out the same day as Jaws: The Revenge, which was PG-13, so we bought tickets to that, at a time conveniently close to a showing of RoboCop. At the time, I had no idea what RoboCop was about – there was no internet, and there were only three channels on television. Four, if you counted Fox.

But no one did. Ever.

Anyway, the only thins I knew about RoboCop is from what I saw on the TV spots, and these indicated that somewhere, in the future, there was a robot who was also a cop, hence the gob-stoppingly awesome name “RoboCop”. And what more was there to know, really? There was this guy, who was part robot, part cop, and he drove around futuristic Detroit, shooting people in the face and punching holes in the wall.

That’s all I needed to know. We saw the movie twice in a row. Free of charge. RoboCop wasn’t just the most awesome movie I had ever seen up to that time, but it inspired me to commit fraud, and to give exactly zero shits whatsoever about it.

It was a special time in my life. So believe me when I tell you that I’m a big fan of RoboCop, to the point where after Peter Weller’s car accidentally ran over my girlfriend’s foot many years later (long story), I had no choice but to side with the Future of Law Enforcement. I get the love for the original movie, but that’s where I think most of this hate comes from. There’s a vocal cadre of people out there who feel that Paul Verhoven’s campy 1980s sci-fi satire is actually something sacred, like The Godfather. The fact that they’re even making a new version at all makes their knees jerk, and they hate it without even thinking.

That’s fine. It’s a free country. But I happen to think the first trailer is pretty cool, and it’s because I have learned the following things from it:

1. Crime is out of control

You can’t say it isn’t true. It’s right up there on screen. This is no different from the first movie, and it’s kind of a pre-requisite for a RoboCop movie. In a world where it’s necessary to have cops who are robots, I expect to see people getting murdered while they’re sitting in church praying not to be murdered.

2. Alex Murphy is a swell guy.

Who is Joel Kinnaman? WHO CARES? All you need to know is that Alex Murphy a family man with a dimple in his chin who is a good cop. He does not deserve to be blown to bits and turned into an unholy monster – WHICH MAKES HIM THE PERFECT MAN FOR THE JOB. Oh, the pathos!

3. Samuel L. Jackson is in this movie.

Does that bother you? Of course it does, because you are with the terrorists.

Are you happy now? And you know what probably happens? He starts out in the old suit, gets the utter shit kicked out of him by some kind of nine foot tall robot octopus, so they give him the black suit, which looks twice as cool and probably has lasers.

5. Michael Keaton is your villain.

And he’s replacing Hugh Laurie, which is fine, because we’re talking about the head of Omnicorp, the world’s most evil corporation. THIS kind of corporate douche demands American acting chops. Plus – RoboCop vs. Batman? Are you telling me you’re against that? Go ahead. Look me in the eye and tell me you’re against that. No, of course you couldn’t. We both knew that. No go find someplace dark to hide, and think about what you’ve done. 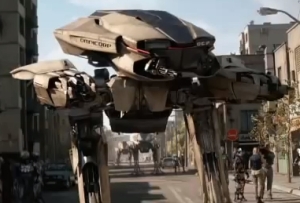 RoboCop is directed by Jose Padilha, who is best known for Elite Squad 2, one of the finest cop films I have ever seen. It’s like Michael Bay and Michael Mann had a son together on a trip to sunny Brazil. And that boy grew up to make a cop movie with such a perfect blend of violence, drama and intensity that it will forever remain a masterpiece of curb stomping brutality.

Here is the logo:

Holy shit. I’m buying a Camaro immediately, so that I can put this on the hood. If you want to know just how ass-kickingly great Elite Squad 2 is, check out my review here. I also think there’s too much emphasis being put on the PG-13 rating. If RoboCop was as brutal as Elite Squad 2, nobody would be able to sit through it. Everyone’s favorite robot cop franchise appears, for now, to be in good hands. Besides, The Dark Knight was PG-13. Did you like that movie?

Of course you did because you’re NOT with the terrorists.

And I’d like to point out that the original RoboCop wasn’t (only) about blood and guts and splattered brains.  Liberty versus security, freedom versus fascism, Robot cops versus NOT robot cops – all with a winking sense of irony and self awareness. Oddly enough, up to the “winking” part, this is not unlike many of the central themes of Elite Squad 2. Also, there are no robots in Elite Squad. I’ll grant you that. But what I’m trying to say is, imagine the original RoboCop on steroids, minus the cheese. That’s the kind of well we have to pull from here.

The potential for awesomeness is high.

But let’s not delude ourselves. The new version is currently slated to open this February, in a part of the calendar that historically suggests this movie might sniff $60 million if it’s a hit, and it’s hard to see more than a niche interest in this character. As much as yours truly loves movies about Robots Who Are Also Cops, it’s not a concept with wide appeal.

And as any stockbroker or pimp will tell you, past results are no guarantee of future success. he cold reality is that this movie could suck. Everything the haters are saying could end up being true. Padilha could drop the ball. But I have high hopes, and I trust that my obvious, high level grasp of all robot cop related facts has convinced you to calm the holy fuck down and look at the positives. This is just one trailer, and in my opinion, it does a great job of telling you everything you need to know about this movie in one shot. You’ll either be in or out. If you’re out, then fine. Go back to your movies about Eating and Praying and Water and Chocolate. The rest of us will be watching cyborgs beat the shit out of each other with fire hydrants.

For us, there will be more trailers, and they will – hopefully – be gravy to this surprisingly ample morsel of cyborg steak. So while we all know there’s no substitute for the finished product, I hereby invalidate all Remake Rage complaints against this trailer. I feel like I understand what this movie is going to be about, I think I understand much of what motivates the protagonist and at least one of the villains. And, most importantly, this is a movie about a robot who is also a cop who rides a robot cop motorcycle and fights other cops who are robots.  Again, I ask you:

Tell me again what’s bad about a robot on a motorcycle?

There was only one thing wrong with the RoboCop trailer, and it’s that there weren’t enough robots.

CRITICULT – Telling you what to think since 2003. There’s only one thing wrong with the RoboCop trailer
%d bloggers like this: