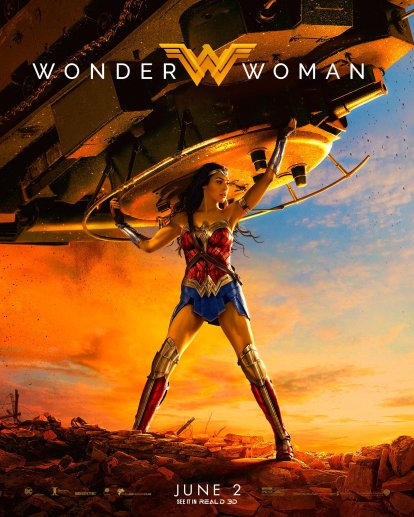 I think we all can agree that the only part of Batman v Superman still worth talking about today is “any part with Wonder Woman in it”.

Good. I can sense everyone nodding so I’ll just go ahead and continue.

Wonder Woman – and her dazzlingly distinct new theme song – put on quite a show in what was otherwise a solidly mediocre film. And Gal Gadot, bewitching accent and all, gave us just a taste of what we might expect in her character’s upcoming solo film. The only negative aspect of her appearance was that it stoked the already overblown national conversation about whether or not a woman could lead an action franchise. It reached a fever pitch after Charlize Theron’s strong performance in Mad Max: Fury Road and with Batman v Superman it finally reached scarlet fever pitch.

I don’t want to sound political but we’ve all lived long enough to have seen our mother bare her teeth to protect her children, or slap someone in the face. So let’s not pretend it’s news that women can be role models in that regard. Women had been successful in action roles before Furiosa and I’d even argue that the failures were more significant. Angelina Jolie was not the problem with Tomb Raider. For that matter Helen Slater was not the problem with Supergirl. Both were individually well suited to the role but when the film around them failed the onus was placed on them.

Isn’t it obvious? Hollywood has traditionally been run by white males and many basic things about our society are informed by that point of view as well. That’s only just now beginning to change, and it scares a lot of people (mostly white males), so the process of truly making this a land where everyone is considered equal is going to take some time. For now let’s say that everyone can shut the fuck up about the cinematic version of this conversation because the votes have been counted and the results are in.

There’s no longer a need to wonder whether a woman can lead the DC Universe because it is fucking happening, bitches.

Before all you chauvinists out there say anything I am not about to tell you that this is a perfect film (it’s not, and we’ll get to that), or that it’s even the best superhero film I’ve ever seen (I love you, Spider-Man 2). What Wonder Woman is though is a fun, buoyant adventure with a cast of (mostly) appealing characters and a set of dramatic stakes that stands outside the ordinary. It is a breath of fresh air in general and the saving grace of the DCEU in particular.

By the way, does everyone know Wonder Woman’s story? Amazon warrior, sculpted from clay, given life by the gods, lives on a hidden island paradise, blah, blah? An American combat pilot named Steve Trevor crash lands on the island, is nursed back to health by our heroine who follows him back to civilization? Yes? Good.

No? Well, now you do. The first act of Wonder Woman takes place on the mystical island of Themyscira, home of the Amazon people. The Amazons are basically a race of female fitness models trained in battle and in possession of strengths and abilities far beyond those of mortal men. Their Queen, Hippolyta (Connie Nielsen), is of course wise and just and her daughter, Diana (Gal Gadot), is eager to follow in her mother’s footsteps and become a warrior. Hippolyta is against this, both because she’s an attentive mother and because there is a dark prophecy (of course) regarding Diana’s role in Amazonian history.

By the time Captain Trevor (Chris Pine) arrives Diana has spent many years training in secret with Hippolyta’s sister Antiope (Robin Wright), the greatest of all Amazon warriors. The film takes place during World War I so when Trevor is interrogated, and speaks of the horrors taking place in the outside world, the idealistic and headstrong princess defies her mother and sets off looking to use her skills for good.

That’s all you need to know about her and whether or not you agree with the pacing of the first act Diana is the hero the DC universe sorely needed. We expect Batman to be gruff and disaffected but the dark, brooding Superman we’re all currently enjoying is hardly true to the character. We already live in dark times. Some hope would be nice and Diana’s childlike optimism and belief in universal justice is a welcome change from Zack Snyder’s emo-music video aesthetic.

If you think she sounds quaint remember that those values coming out of a child are merely cute. Coming out of someone who – in a mini-skirt – could murder a platoon of Marines faster than you can say “Semper Fidelis”, it’s not that hard to get behind her.

Trevor takes Diana back to London where she insists on joining the Allies. She’s convinced that Ares, the god of war and archenemy of her people, is behind the war and that it’s her duty to stop it. Trevor, meanwhile, is having trouble letting go of his manly skepticism, even after seeing the Amazons in action. Diana, meanwhile, is struggling to maintain her optimism in the face of German aggression AND the openly sexist nature of European society at the time.

You may be wondering why I’ve not said much about the villain. That’s complicated and it brings us to the “flaws” section of our review.

There’s a bit of a twist involved with the baddie and although I won’t spoil it I can also say that doing so wouldn’t make it less stupid. Ostensibly, the black hat here is the German General Ludendorff (Danny Huston), a sadistic man who insists on continuing the fight even as his superiors are preparing to concede defeat. He and his psychotic hench-woman Dr. Poison (Elena Anaya and yes, that’s really the character’s name) have a plan up their sleeve to extend the war in hopes of giving their country an edge.

As I suggested, the two villains are more than what they seem but this is clear very early in the story and to call the ultimate reveal a “letdown” is like calling Jeffrey Dahmer “socially awkward”. But I’d argue that the antagonist’s nature is less important than how Diana responds because the core of the story is not her relationship with Trevor or feminism or even the war itself.

It’s about an idealistic person of great power trying to find a place for herself in a world where idealism is dead and power is almost universally abused.

And this is why the movie works so well. Christopher Reeve made us believe a man could fly because we loved him and the character he was playing, and therefore bought into Superman’s goofy optimism. Gal Gadot is no different. Not only is her character believably framed as a fierce-but-compassionate warrior, but the actress playing her perfectly inhabits the role to the point where you must be invested in her.

Additionally, I should give Chris Pine a shout out. I was skeptical of his casting as Captain Kirk all those years ago, but since then he’s put together a resume of impressive individual performances and is in demand as a leading man. Steve Trevor could have just been a neutered sidekick alongside his Amazonian counterpart. But the character has a clear thematic purpose and it’s possible that his values and Diana’s aren’t so far apart after all. It’s a stronger performance than he was required to deliver and he’s due credit.

Large chunks of Wonder Woman appear to have been shot against green screen but the set design and cinematography are generally very good, particularly in bringing Diana’s homeland to life. Some of the individual visual effects are rather questionable (I saw a woman do a back flip off a horse that couldn’t have looked less convincing if you replaced her with Lee Harvey Oswald), and overall the film has a very “digital” look.

But this being a comic book movie that seems to be par for the course these days.

All in all director Patty Jenkins has crafted one of 2017’s best success stories while also managing to silence the preposterous discussion our culture never really needed to have. It’s unfortunate and I hate to say it but she had to get Wonder Woman right and she knocked it out of the park. The director of Monster (2003, coincidentally starring Charlize Theron) has once again thrust herself into the national spotlight by turning in what will surely be remembered as one of the most significant films of the decade. And having just signed up for the sequel it looks like Wonder Woman will remain in good hands.

And a note to everyone who will ever direct another super hero film again: write to the strengths of your character, and not the fad of the times.