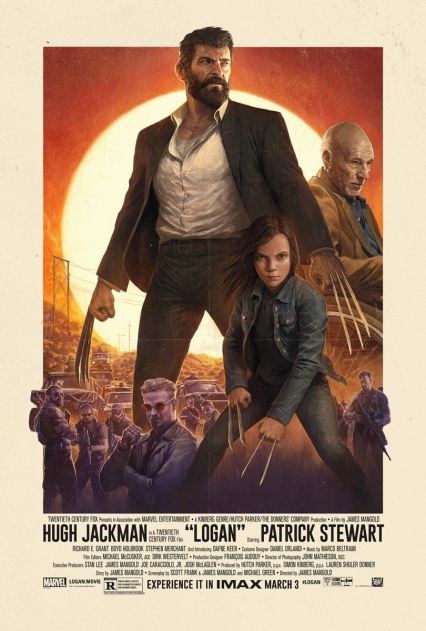 There’s an old saying: “Be careful what you wish for.”

Almost every culture on earth has some variation of this saying and most of us can remember, as children, having it dramatically reinforced on more than one occasion. It means that time is often better spent appreciating what one has, rather than being bitter about what one does not. It makes so much damn sense that it’s easy to forget, assuming that like it’s cousin “nobody’s perfect”, it only applies TO us when it’s convenient FOR us.

What does this have to do with movies in general, or Logan in particular, you ask?

Well, I’m on record somewhere as lamenting the way it seems nobody has been able to make a good Superman movie, at least since 1980 (and even that is a matter of some debate). I used to be fond of saying things like:

“Villain attacks earth, defeats Superman, Lois gets in trouble, Superman gets his act together in time to hit villain with a skyscraper, roll credits, count money. How is that hard?”

Well, Zack Snyder delivered precisely what I asked for in 2013, and the results were…mixed. I finally got to see Superman hit someone with a skyscraper, but I wasn’t prepared for it to last nearly ten minutes and kill thousands of people. I enjoyed Man of Steel, but I still came away numb. And it was as much due to the implied carnage as it was to the fact that the simplest, most binary of all superheroes is the one Hollywood just can’t seem to nail.

My guess is that often, the smart choice is to put a character in the best position to succeed with whatever it is that makes them tick. When you deconstruct a character you fundamentally alter who they are. That represents a monumental risk for such an iconic individual, however fictional they may be. It may be wiser to change the character less and their environment more, and examine how our hero responds.

This is the direction James Mangold went with Logan, the third (and best) attempt at a solo outing for Hugh Jackman as Marvel’s Wolverine.

Wolverine is certainly a more nuanced hero than Superman, but not by much. Logan is also always ready to use his abilities to defend those weaker than himself. But he constantly complains about the burdens of power, and what he really hates is the fact that he even has a moral compass. That, combined with his uncanny longevity has led to several lifetimes of reluctantly getting drawn into fights with no material upside.

Now that I think about it, the biggest difference between Wolverine and Superman just might be one of attitude. Superman loves being the savior of humanity. Wolverine just can’t wait for it all to be over.

Nowhere is this better on display than in the opening moments of Logan. Somewhere in the near-future, we find the once mighty Wolverine (Hugh Jackman) sustaining himself by both driving – and living in – a limousine. He awakes to the sound of a gang trying to steal it out from under him, and the bitter resignation with which Logan approaches the inevitable conflict could have been played for laughs.

No, just like in the comics, he’s aware how this will play out. He’ll ask them nicely a few times to go away, one of them will shoot him in the face, he’ll shrug it off and cut them all to tiny bits in a rage fueled festival of blood and death. That’s precisely what happens, and in case you’re wondering, the answer is yes. Logan is rated a rather hard R – primarily for violence. For those clamoring to see the Wolverine unfettered by the goofy limitations of a PG-13 rating, welcome to heaven.

Logan himself is in hell, as it turns out his powers are failing, and he seems to be nearing the end of his life. Seemingly the only thing that gives him purpose is caring for an elderly Professor Xavier (Patrick Stewart), who is having his own age-related superpower issues. It’s an interesting implication – as you age, your powers begin to fail you the same way the rest of your senses eventually will. For proof of the impact of this, be on the lookout for a chilling explanation of what happened to the rest of the X-Men.

So, Logan and Xavier scratch out a living in the dust, watching one another edge ever closer to death.

If you’re thinking this sounds like lots of fun, you’re a damn liar.

There’s nothing fun about Logan. This is a thematic story about heroes long past their prime, struggling with the implications of this in a world that no longer values them. As a writer/director, James Mangold is best known for emotionally charged works of prestige like Girl Interrupted and Walk the Line. This isn’t to imply that Logan is worthy of direct comparison to those films. But the level of pathos present in this darkest of all X-Men films is something that comic book movies frequently aspire to, but almost never achieve.

Visually, Logan benefits greatly from the work of cinematographer John Mathieson, a veteran of the franchise dating to his work on X-Men: First Class (2011). So much of what makes Logan (which takes place almost entirely in the middle of nowhere) so visually arresting is due to Mathieson’s gift for framing shots in artful ways that speak volumes (in addition to Gladiator (2000), check out 2015’s The Man From U.N.C.L.E., an underrated gem that’s also one of the most beautiful looking films of the last few years). As I implied earlier, Logan paints with the broad strokes of a Western, and in that world, effective visual storytelling is essential.

I’d be remiss if I didn’t mention Dafne Keen, who plays a fellow mutant called X-23, a name which fellow geeks will immediately recognize. As for the rest of you, I can’t go further into her without spoiling some things, but suffice it to say that her character serves as the thematic linchpin for the entire story. Not only is she a twelve year old girl who does not speak English, but she’s required to be as ruthlessly effective a killing machine as the Wolverine.

She all but steals the film when she’s onscreen, and not in the precocious way children often do. I mean in the “stabbing people in the throat” and “tugging at your heartstrings with her plucky resolve” way. And if you’re wondering how a child ends up like this, prepare yourself for the uncomfortable answer. The film is quite candid about the chilling implications of a guy like Wolverine hearing the voice of experience in a preteen girl.

Keen delivers a truly noteworthy performance, and I would not mind seeing this character – played by this actress – in future installments of the franchise. For now, Logan revolves primarily around her relationship with the title character, and the standard Marvel story beats of someone wanting to hunt her down and harvest her powers for Team Evil.

I guess the only thing left to say is that while I enjoyed Logan, and it did more or less deliver what I asked for, I was still left somewhat unfulfilled by the experience. I think it was because part of me didn’t enjoy seeing the flawed, but heroic Wolverine and the noble Professor X reduced to living in a hollowed out camper shell, cussing each other out as they pass a can of beans back and forth and bitch about the ravages of old age.

It’s bleak and depressing. It makes me sad. Yes, I wanted an R-rated Wolverine, but because I wanted the violence to be less cartoonish and more honest. Not because I wanted to hear Professor X tell his most stubborn protégé to go fuck himself.

Still, Logan serves as a fitting sendoff for Jackman, who says this is his final appearance in the role. It’s a simple story about redemption that packs more of an emotional charge than you’re used to seeing in this kind of film. I enjoyed watching it and I’m glad it exists, but I’m not sure I need to see it again. And I’m not sure it’s the movie I really wanted.

Be careful what you wish for.