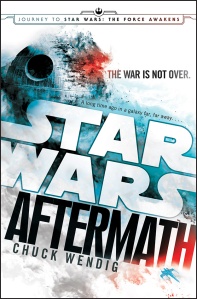 After Disney bought Lucasfilm and secured the rights to Star Wars they announced that new movies would be coming shortly. As I write this The Force Awakens is less than two months from release and based on a spectacular trailer the fandom hasn’t been this excited since The Phantom Menace was announced back in the late 90’s. At the same time Disney also revealed that the vast catalog of games, books, and comics that detailed the events after Return of the Jedi would no longer be considered canon. Overnight this collection of stories, known as the Expanded Universe (or EU), were relegated to not much more than fan fiction. Gone was Mara Jade, Admiral Thrawn, the Solo twins, the death of Chewbacca, the Jedi academy, all of it. For the most part this is not such a bad thing.

For every Heir to the Empire trilogy there were buckets full of terrible trade paperback books. Rather than address the rather bleak story that formed after Jedi, Disney jettisoned the entire thing and re-set the story. Now everything after Return of the Jedi is a blank slate. The first title to be written on that slate is Star Wars: Aftermath. Not to worry though, if the list of new and upcoming titles on Amazon is any indication we are about to be swimming in all new Expanded Universe titles. There seems to be a push to introduce as many new characters as possible very quickly to fill the void. Hopefully they won’t stretch themselves too thin.

A few months after the destruction of the second Death Star the fledgling New Republic is sending scouts to make contact with Outer Rim worlds. During one such mission, Captain Wedge Antilles stumbles upon a secret Imperial summit on the planet Akiva. He is captured but manages to send a brief distress signal. Luckily an Alliance pilot is on Akiva, Nora Wexley, and she, along with a disparate group of unlikely allies including an ex-Imperial officer, set about disrupting the summit and rescuing Wedge.

To say more would spoil the enjoyable twists and turns the story takes. Aftermath is the first in a new trilogy and the simple set up of a rescue mission is used to introduce us to a new group of characters as well as fill us in on the state of the galaxy after the Battle of Endor. Along with the main story there are short side chapters catching us up on other events such as the formation of the New Republic Senate and plans to de-militarize the New Republic. These are fascinating glimpses in to the much larger picture and I hope they will be expanded on as the story continues.

A welcome surprise with this book is the prevalence of female characters. The lead Admiral of the Imperial fleet is a woman, Rae Sloan, and she is described as having dark skin. While she is ruthless and calculating she’s not exactly evil and I could see her turning sides before this story is over. In addition to Nora, there is a female bounty hunter, Jas Emari, out to win some Republic sanctioned bounties for Imperial heads. Mon Mothma is featured as a secondary character in one of the interludes and she confers with a male and female adviser on major decisions. Not only that, sexual diversity is also addressed in a casual manner. Nora’s aunt is married to a woman, and one of the main characters reveals they are gay when another comes on to them romantically. It’s a refreshing change and indicates that the larger diversity of cast in The Force Awakens is a conscious and welcome decision for the series. This inclusion is contributing to the low score on Amazon from the same group responsible for hijacking the Hugo awards this year.

The story itself has that Star Wars feel but with a more serious edge. The dialogue and characters are more complex, there is a weight to this story. Nora was at the Battle of Endor, flying one of the only Y-Wings to enter and escape the Death Star before it exploded, and she is shell shocked from the experience. Wedge is also shaken by the climactic battle and Admiral Ackbar is reluctant to move the fleet for fear of leading them in to another trap. Mon Mothma wants to end the war and bring peace to the galaxy by democratizing the New Republic and dismantling the military so that the New Republic can never become the Empire. It’s a thin parallel to our own geopolitical landscape but a welcome one that lends more gravitas to what at times has been a silly story of a galaxy in crisis a long time ago and far, far away.

Knowledge of Star Wars lore is helpful here to get through the many casual references to various alien species and planets. The “small world” aspect of Star Wars where everyone knows of everyone else despite the massive size of the galaxy continues here. Most characters and planets are referred to that we have seen in the 6 movies including references to Mustafar, the Trade Federation, Geonosis, Correlia, and others. The empire ruled millions of star systems yet the references are all for planets and races we have encountered before. Nerf herder is an insult, characters have bad feelings about this, no one wants to arm wrestle Wookies, and Mandlorian armor is the best. This myopia has long been a shortcoming of the Star Wars universe, and it continues here. It’s not too bothersome and the touchstone for what people expect can help sell the story, but it would be nice to have a Star Wars break off entirely from the “known” SW universe.

If like most fans you cannot bear the anticipation for The Force Awakens, Aftermath is a good appetizer before the main course. It has that Star Wars feel with fun characters, exciting action, and a swashbuckling attitude with just enough gravitas and parallels to our own world to make the story relevant again. The next book in the series comes out June 2016, called Life Debt. It’s already on my list for CBR8.