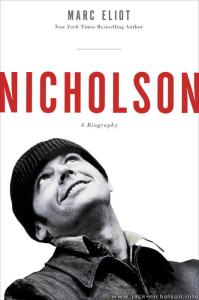 If nothing else, Marc Eliot’s biography of Jack Nicholson reminded me why I don’t typically read biographies of still living people when the subject has no involvement with the book. In relying exclusively on archival interviews and firsthand accounts from a handful of Nicholson’s friends Eliot has put together a superficial account of a man whose life is anything but superficial. Nicholson: A Biography recounts all of Jack’s life from his childhood to arriving in Hollywood up to 2013, yet when it was over I didn’t feel I knew any more about the man then when I started the book. According to Nicholson, Jack has seemingly slept with every woman in the world, fiercely loyal to his friends, an art collector, a diehard Lakers fan, has somewhere between 4 and 50 children with various women, and has used recreational drugs for large portions of his life. Yawn.

What the book fails to shine a light on is the man’s talent, choosing to focus instead on the tabloid fodder of romantic entanglements such as you would find in US Magazine. If you have any interest in specific performances or movies and want to learn more about them this is not the book for you. Eliot spends a couple of pages on each movie, and most of that is spent inexplicably recapping the movie. It gets so annoying that I started skipping those paragraphs for any film I still planned to watch but hadn’t yet so that I could be unspoiled. Eliot seems to be trying to use Jack’s movies and performances to bring out specific things in the man’s actual personality but it doesn’t work when there is little to no analysis of the man’s talent.

Most of the book is spent talking about Jack’s interpersonal relationships with both men and women. The first part detailing his experiences in Hollywood working and playing with people like Roger Corman, Peter Fonda, Bruce Dern, Dennis Hopper, and all those other luminaries-to-be from the 60’s and 70’s is interesting, but still it focuses on Jack’s party-boy and uninhibited lifestyle rather than the work. Jack was a screenwriter when he started out and apparently the only time he wrote was when he was stoned out of his gourd or on acid. It is telling that the people that could most provide insight into the man, like his longtime love Angelica Huston, are in the book only through archival interviews. Eliot spends a lot of time talking about a family secret in which Jack’s sister was secretly his mother, and his mother was secretly his grandmother because his mother had him when she was so young. This was kept from Jack for years and he has never publicly accepted this “truth” and I can understand how difficult a thing that must be to deal with. But Eliot positions this “fact” as the center point to the whole book and unless you are a regular tabloid reader I can’t imagine why this would be all that interesting. I know it wasn’t to me.

At least Eliot keeps the book moving along at a breezy pace. His writing is conversational which make it a quick read. What is not so great is the editing problems and flawed fact checking. Several sentences seem to be jumbled up making them impossible to decipher. At one point the same cast member is listed twice during an anecdote. On more than one occasion I was left reading a quote that supposedly was making some point the author was driving at, yet I didn’t understand the meaning and it wasn’t explained in the text. Sloppy is the best word to describe it. Jack’s various romantic partners are detailed as well, with more space dedicated to Angelica Huston than any others. This is where the book should have revealed a more complex and rounded figure of the man but instead it just recounts all the time they were together, broke up, re-united, ad nauseum. It’s monotonous and there is nothing in the reasoning other than “Jack can’t stay monogamous”. Maybe the reason for the complexity in their relationship is in Angelica Huston’s own recently published memoir; it’s certainly not here.

I’ve been a fan of Jack Nicholson for years and I was looking forward to reading this book. I was hoping for some breakdown into his methods in bringing characters to life with his own unique charisma, but that is not to be found here. If you only want to read about a life spent drugging and rutting his way through Hollywood than this is the book for you. If you want more than we can still hold out hope for Jack’s own memoir to one day materialize.

Disclaimer: I received this book from the Blogging for Books program in exchange for this review.

CRITICULT – Telling you what to think since 2003. All Fluff and No Substance Makes Jack’s Biography a Dull Read
%d bloggers like this: