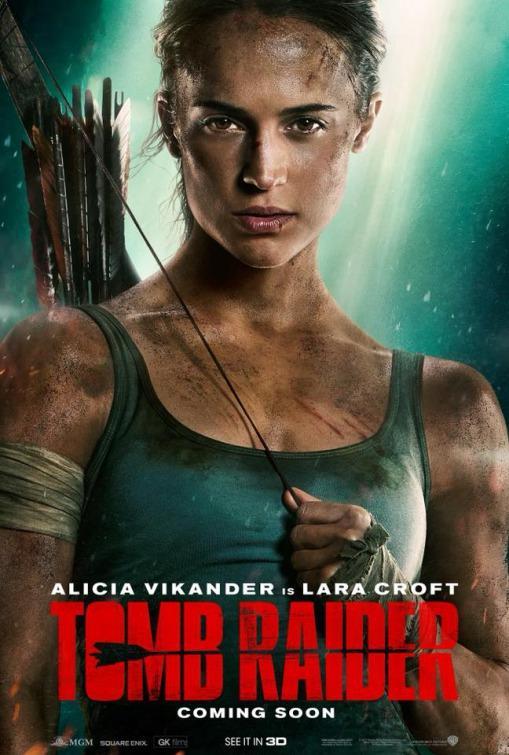 When the announcement came out that Swedish actress Alicia Vikander would be taking on the role of Lara Croft in a new movie I was pleasantly surprised. Coming off of her Oscar winning role in The Danish Girl and a blistering performance in Alex Garland’s brilliant Ex Machina, her involvement signaled to me that this new Tomb Raider was going to be something special. I was also familiar with Norwegian director Roar Uthaug and his films starring Ingrid Bolso-Berdal (Westworld); Cold Prey and Escape. Both of those films are gritty action/horror and that was the tone I was looking for in a new Tomb Raider movie. The story was expected to be based on the critically acclaimed 2013 video game  – which I loved – that rebooted the story of Lara Croft with the tale of her first expedition and subsequent struggle for survival on a cursed island swarming with mercenaries.

After finally getting the chance to watch the movie  -and reading the negative reviews – I have to say my expectations were exceeded. Tomb Raider is not a video game movie. It’s a good movie that happens to be based on a video game.

When we first meet Lara Croft she is a London bike courier trying to make ends meet. Her father, Lord Richard Croft (Dominic West), disappeared seven years before and Lara has deluded herself in to thinking he is still alive so she has never signed the papers transferring control of the vast family fortune to herself. After getting arrested for a traffic altercation, Anna (Kristen Scott Thomas), the head of Croft Industries, bails her out and implores that Lara sign the papers and take her place as head of the Croft family in her father’s stead. However, before she makes it official she learns where her father went and sets off for the mysterious island of Yamatai with hired captain Lu Ren (Daniel Wu), to search for the tomb of Himiko, the Queen of Death.

There is something cathartic about watching characters get the snot kicked out of them and still stand up for more. It’s not sadistic, it’s inspiring. From John McClane to Ellen Ripley to Rocky Balboa to Indiana Jones we love to see our heroes go to the absolute brink of destruction yet come out the other side bruised, bleeding, but still standing. In Tomb Raider, Alicia Vikander’s Lara Croft takes more punishment in the first hour than Angelina Jolie did in 2 movies. Director Roar Uthaug keeps the action more grounded than the previous films and emphasizes Lara’s resilience in the face of overwhelming odds rather than firepower. She’s smart, courageous, strong, and ruthless. And in her nemesis, Mathias Vogel, she has more than met her match.

The great Walton Goggins plays Mathias with a depth of character that makes him more than just an obstacle in Lara’s path. Mathias is on the island of Yamatai with a band of mercenaries looking for Himiko’s tomb as well and he can’t leave until he finds it. After being trapped on the island for seven years his desperation is starting to drive him crazy and all he wants to do is complete the job and get off the island, no matter the cost. The gravitas that Goggins brings to the role helps not only set Mathias up as a worthy foe to Lara, but makes him easier to empathize with as well even as he demonstrates murderous cruelty.

When Lara is running through the island firing off arrows, dodging under obstacles, and leaping from one calamity to the next the movie is rousing, tense, and a lot of fun. The movie was filmed largely in South Africa and England and the cinematography is beautiful. Any CGI is largely used for scene purposes to augment existing sets rather than as creatures Lara has to square off against. This restraint is refreshing. Even as Lara is defying death there was no part where I thought it was impossible for her to survive. If you can suspend your disbelief for Bruce Willis and Harrison Ford, you can do it for Alicia Vikander*.

There are a couple of scenes toward the end that are over the top and out of place with the more grounded action from earlier. These more game-like scenes are staged well but the internal logic is faulty and their inclusion is jarring. The movie would have been better off without them but I do understand why there were included. That said, they make up a very small part of the movie and there is so much to recommend otherwise I’m willing to give them a pass.

With a box office gross of $270M worldwide on a $90M budget the new movie was a smash hit, even if the domestic box office didn’t appear to be. There are rumors that even if a sequel emerges – expected to be based on the Rise of the Tomb Raider story from the video game sequel – that Alicia Vikander may no longer be the star. This would be a huge mistake as she is the best part of the movie and Tomb Raider is worth seeing for her performance alone.

Ignore the other critics and listen to your buddy, Tyler. Tomb Raider is a gem, don’t miss it!