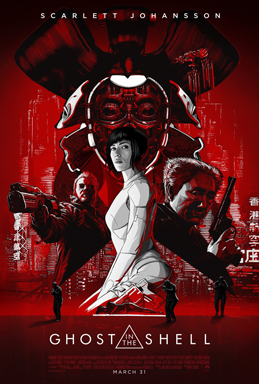 To say that I’m a fan of the original Ghost in the Shell would be a massive understatement, not unlike “American versions of anime films usually suck.”

Mamoru Oshii’s legendary 1995 anime is widely considered a masterpiece, and served as inspiration for a generation of artists and casual nerds, including yours truly. So keeping in mind what I’ve just said, you can see how I greeted the news of an American version with skepticism. On the one hand, it was nice to see it happening at all. Thinking man’s source material like Ghost in the Shell wasn’t taken very seriously by American studios until relatively recently.

But thanks to the evolution of visual effects, an insatiable thirst for adaptable properties, and Scarlett Johansson’s still considerable juice at the box office, someone felt the climate was right to bring a live action version of this beloved property to America. I don’t think they were wrong. Modern audiences are a weird combination of sophisticated and incurious. So, if you can successfully combine visual appeal, consistent action and at least the appearance of thematic depth, you can cast a wide net.

Here’s the thing, though. Why bother to adapt a known property, only to then homogenize it into something as generic as a suburban coffee shop?

I don’t know either, but that’s what happened to the live version of Ghost in the Shell. By itself, it’s a serviceable action movie filled with serviceable action sequences and serviceable performances. And for those who need it, the live-action version pays at least thematic lip service to the original. But the story has been neutered of what made it thought provoking, in favor of hedging its bets as a futuristic Bourne knockoff.

And then of course, there’s that whole “whitewashing” thing. We’ll get to that, but I’ll tell you right now – an Asian lead would not have improved this film. Trusting its audience to embrace the challenge of the original source material is what might have made this a daring and unique experience.

Still, it’s not without its charms.

Johansson plays Major Mira Killian, an advanced combat cyborg working for Section 9, an elite anti-terrorist squad in an unnamed Asian megalopolis. The only organic part of the Major is her brain, retrieved from her original human body after a fatal boating accident. The Major’s body and its abilities comes courtesy of Hanka Robotics, a cybernetics company that appears to have a lucrative contract with the government (hmmmm).

Cybernetic implants are a part of everyday life in this world, with ordinary citizens often spending a lot of money to enhance their bodies for both tactical and non-tactical reasons.

Hanka benefits a great deal from this of course, but nothing is more important to them than the Major. She’s one of a kind, and a lot is riding on her success. The title of the story comes from the reference to her “shell”, or physical body. Her “soul” or “spirit” – the part of her that’s human – is called her “ghost”.

For her part, Killian adjusts quickly to her situation and is partnered with Batou (Pilou Asbæk), another Section 9 agent famous for his groovy eye implants. Their first case together happens to be a terrorist attack on a Hanka business conference, where some of the robo-geisha girls went bananas and started killing people. The culprit is revealed to be a malevolent hacker called Kuze (Michael Carmen), who has some kind of personal beef with Hanka. As their investigation progresses, Killian and Batou begin to see that there’s a dark side to the world’s largest maker of killer robots.

Killian also manages to draw Kuze’s personal interest, eventually causing the Major to “doubt her ghost”. This sets up what could have been a remarkable existential exploration on scale with the original anime. Unfortunately, the live version of Ghost in the Shell isn’t interested in any of that. What it wants is to do is dazzle you with how well it can recreate the visual look and feel of the original.

And you know what, I can admit it – if that were the only way in which I had to judge this movie, I’d say this is easily the Fury Road of 2017. The city where the Major and her team live and operate is a sprawling metropolis reminiscent of the Blade Runner or Judge Dredd universes. It’s actually more vibrant than the depiction in the original movie, and great effort was clearly taken to emphasize the fact that despite clearly being in Asia, this is a very multicultural society.

That’s all well and good. But as I suggested earlier, why go through all that trouble if the most significant thing you were going to change about all this is the ethnicity of the main character? And while there is a reason given for it, and it does (kind of) make sense, it also feels specifically contrived for that purpose. I felt it was an unnecessary twist that the story was required to focus on at the expense of, well, anything else.

I wasn’t kidding earlier when I called this a “Bourne Knockoff”. As originally written, Ghost in the Shell told a compelling story about the nature of human identity, what qualifies as consciousness and whether or not you can objectively trust your own sense of self awareness.

That’s a lot of ground to cover, so I regret to inform you that the new version makes no effort to try. But with one of the architects of the Transformers cinematic universe credited as a writer on it, that shouldn’t surprise you.

Killian and Batou have a handful of character building moments where they superficially ruminate on what it’s like to get your oil changed. Kuze has something to contribute to that discussion as well, but his importance to the story ends up less a thought provoking element and more an exercise in painting-by-numbers. I can’t believe I’m grabbing at this low hanging fruit, but one might say that this film bears the unmistakable shell of the original, but the ghost – the essence of what made it special – is gone.

Nonetheless it’s better than it should be, and really is a pretty decent action movie. I honestly enjoyed it, even as an admitted fan of the source material. And visually, it’s undeniably gorgeous enough that I’ll probably buy the freaking Blu-Ray and watch all the extra features a dozen times before I die.

And for what it’s worth, Scarlett Johansson acquits herself well, although I do find her voice a little flinty for a police officer. But she does well to successfully convey the idea that her character, although not quite human, is no less conflicted about her existence. I’m even a fan of her creepy “robot walk” that some have derided. It’s a shame she became associated with all the bad press surrounding her casting, because I don’t think it was her fault.

She’s just trying to do her job, just like I am in writing this article about how much her film disappointed me.

Additionally, I would be a terrible human being if I didn’t acknowledge Dutch actor Pilou Asbæk as one of the best things in the movie, and in fact I had little complaint with the cast in general.

Ghost in the Shell is basically what would happen if The Bourne Identity and Blade Runner had a baby that was raised by one of Michael Bay’s roommates. It is by no means a terrible film, but the fact that it’s so utterly ordinary is what makes it so frustrating. It’s like making a big fucking deal out of the fact that you’re making a period-authentic adaptation of Romeo and Juliet, except you’re also changing the story to make it a transgender buddy cop movie.

It’s not a failure, it’s just only successful in every way possible other than the one that matters the most.

When some wild-eyed, eight-foot-tall maniac grabs your neck, taps the back of your favorite head up against the barroom wall, and he looks you crooked in the eye and he asks you if ya paid your dues, you just stare that big sucker right back in the eye, and you remember what ol' Jack Burton always says at a time like that: "Have ya paid your dues, Bruce?" "Yessir, the check is in the mail."