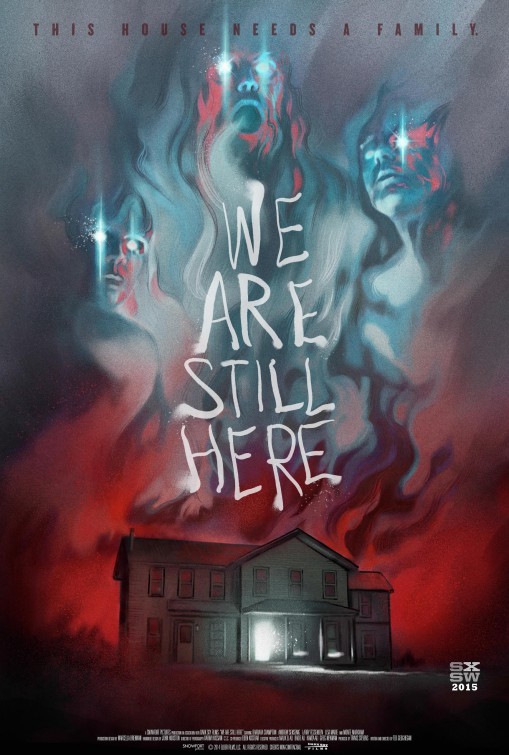 Tim Geoghegan’s We Are Still Here begins with Paul and Anne Sachetti (Andrew Sensenig and genre veteran Barbara Crampton) moving to an old house outside the town of Aylesbury following the tragic death of their grown son. Immediately upon moving in Anne feels a presence in the house and believes it to be their dead son, Bobby. A few days after moving in an older couple, Dave and Cat McCabe (Monte Markham and Connie Neer), stop by and within minutes are providing exposition on the dark history of the house. Soon after an electrician working on the boiler has a run in with the force haunting the house. Convinced that something is wrong Anne invites her friends, May (Lisa Marie) and Jacob (Larry Fessenden), to come to the house and try to make contact with her son. Poor decisions are made, secrets are revealed, the spirits in the house rise and to the surprise of no one wreck bloody vengeance on the living.

That’s really it for the plot. Other than setting the movie in the late 70’s there isn’t a twist that takes the viewer by surprise other than how the final act goes down. Two things make the movie memorable with the stand out being the ghost effects which are largely, if not entirely, practical in execution. Director Geoghegan also opts for physical gore effects instead of digital and the results lend authenticity to the horror.

The second boon for the movie is the cast. Barbara Crampton is something of a B movie legend, most memorably in Howard Gordon’s classic splatter horror films Re-animator and From Beyond with several years in a variety of American soap operas. Most recently she played the doomed matriarch in Adam Wingard’s stellar home invasion thriller, You’re Next. Larry Fessenden is a writer/director/actor known for The Last Winter and I Sell the Dead. He brings a loopy but good natured performance as the in-over-his-head Jacob. The rest of the cast is made up of a few “Oh, it’s that guy!” actors and all treat the material more seriously than it probably deserves.

Geoghegan pads out the slight 84 minute run time with establishing shots that go on about three times as long as they should. He shoots largely handheld which gives the impression that the audience has the point of view of the ghosts at times which works to build tension. Early on the ghosts manifest as silhouettes and are framed in doorways and dark corners lending to the suspense. When you finally get a close look at the ghouls they are appropriately terrifying and fiercely unstoppable in their single minded pursuit to kill during the gory finale.

As a fan of the genre I see a lot of bad horror movies. We Are Still Here isn’t going to find a place in my collection but for a late Saturday night movie you can do a lot worse. The spooky atmosphere, short run time, and go-for-broke finale make We Are Still Here a good option next time you are in the mood for a good scare.