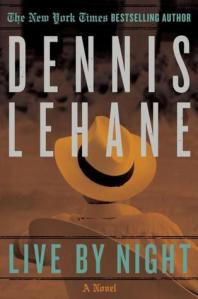 Live by Night is a crime saga focused on the characters, portraying them as more than one dimensional thugs. Most of them do what they do for a reason. Taking place in 1927, 8 years after the Boston Police strike, Live By Night shifts focus from Danny Coughlin to his youngest brother, Joe. Now 20 and an accomplished small time criminal, Joe falls for the wrong woman and it changes the trajectory of his life. Along the way he rubs elbows with real and fictional characters while rising to power trafficking rum for the Italian Mafia in Tampa, Florida during the Prohibition years.

Where The Given Day was more focused on the larger macro story of the Boston Police Department and formation of the Policemen’s Union, the largely stand alone sequel Live by Night is a more introspective book that takes you inside the world of the criminals to see the good and the bad. Like most crime sagas there are betrayals, and explosive violence, but there is also the highs that come from asserting your dominance on an ecosystem and changing the shape of a city forever. Even more than that, the book is a coming of age story. We follow Joe Coughlin from his late teens to his 30’s and see him struggle with his place in the world and if he is a good man. He thinks of himself as a good man, just sometimes he has to do bad things. How he reconciles that duality is the conflict here. The power plays and typical gangster stuff, while quite prominent and entertaining, are always in a lesser position to that central question.

That’s not to say Live By Night is a ponderous and dry read because it is anything but. The book moves fast following Joe from a 2 year stint in a horrific Boston area prison to the streets of Ybor City, the rundown area of Tampa where the cigar rollers and rum runners ply their trade. He establishes himself quickly showing an aptitude for big picture vision and cunning battle tactics. His fortunes rise, he falls in love, and for a time things are going well. Then he has a run in with local KKK members and other small time operators trying to make a dent in his empire. Like Michael Corleone, Joe Coughlin too is a tragic figure and a mostly good man that just happens to be very good at being a criminal. We know he is headed for a fall, because that is the way these stories go. What Lehane does so well is keep the reader off balance to never know when the violence is going to strike. Time and time again we see that the true threat to Joe’s criminal empire is from within, not without. Can anyone pay enough to reconcile the wages of sin?

If you like Dennis Lehane but haven’t read the Coughlin family series I encourage you to give it a shot. The Given Day is by its nature a much more expansive story with a large cast of characters. Shifting focus away from the older brother changes the dynamic of the series, a move that Lehane must be happy with because there is a third and final novel in the trilogy, World Gone By, which came out earlier this year.

On a side note, Ben Affleck has been attached to direct the movie adaptation and I’m pretty excited for it. Affleck has a talent for smart, character driven stories and Live By Night is right in his wheelhouse. Pre-production has started with set building in Georgia according to trade reports as of this review.