I’m not a big fan of romantic comedy, but I am a big fan of Kurt Russell. He’s the greatest human being alive and I wish he was my dad. But my deification of America’s greatest living treasure is a subject for another time. Today, it’s my intention to regale you with the delightful story of how I accidentally killed a little part of someone I care about, using nothing but the ancient art of film criticism. Just remember – I didn’t ask for these abilities. They are both a blessing and a curse.

Recently, The Missus was talking to a friend about me and mentioned that I write film reviews, and no doubt spoke of my many incredibly manly qualities. The friend asked if this meant that I was unable to “turn it off”, meaning shut down my mind and experience a film with an uncritical eye. My rapier with compelled me to use the Fast and Furious franchise as an example of how sometimes, I have no choice but to turn my brain off and enjoy the movie. In reality, the answer is “not really”. Just as an astronomer cannot look at the sky without seeing stars, I can’t watch a movie without…also…seeing stars…or…something. I don’t know, I lost my train of thought. The point is that no, it’s never completely shut off. That’s like asking me to watch a football game without noticing what quarter it is. 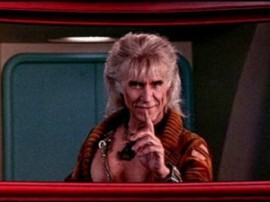 Fast forward to a night not so very long ago. The Missus and I were doing dinner and a movie at home. And although I very much wanted to watch Wrath of Khan (in my mind, to bring Star Trek OUT of darkness), odds were 100 percent she was going to veto that suggestion. I’d been promising her for weeks that we’d watch 1987’s Overboard, starring Kurt Russell and Goldie Hawn. It’s one of her favorite movies of all time, and by that I mean “in the top five”. Seriously. This is a movie that most reasonable people, even if they legitimately enjoy it, would not put in their top twenty or thirty movies.

And it’s in her top three. I don’t say that to make fun, both because she’s going to read this and because I want to illustrate how important our watching this movie together was to her. I want you to know it now, because I didn’t get it until after the unfortunate events herein unfolded. I had never seen Overboard, but I’m game to watch almost anything and Kurt Russell is my personal hero so I said yes. I prefer my Kurt Russell movies to be ones where he’s shooting someone in the face or landing a hang glider on top of the World Trade Center, but unfortunately, Christmas is some months away.

Plus, doing this now guaranteed that Wrath of Khan would be watched later. Everything was going according to plan.

So for the sake of a good setup, let’s recap the plot of the movie. It involves a snooty heiress (Hawn) who runs afoul of a rough around the edges, hard working single dad with a heart of gold (His Kurtness). Said heiress falls overboard (har) on a yacht trip with her uncaring husband (Edward Hermann, for those keeping score at home) and loses her memory. Russell’s character and the husband see her on television, completely losing her shit at the police station. The husband decides not to claim the shrill harpy so he can turn the yacht into a party boat and dip his wick where he wants. Russell decides to get his revenge by claiming her as his wife, and making her take care of him and his four undisciplined but adorable kids – who are also in on the scam.

She suspects at first that this is an obvious lie, so I unexpectedly had to give the film credit for being self aware. in response, Russell goes so far as to have a resourceful friend whip up some fake family photographs (this was in the days before Photoshop, so that’s one hell of a friend) to bolster the deception – a deception that Kurt, the kids and the Best Friend coordinate with Teutonic precision.  It works, and it’s all the convincing she needs, because movies.

She resigns herself to the fact that this is her life and she is home. Queue the obvious story beats – Goldie can’t cook, can’t clean, and can’t do anything the mother of four children should be able to do. She is humiliated and in over her head and for a while, Kurt’s demonic plan works to perfection. But just when she is doubting herself the most, she suddenly bonds with the kids, has an epiphany right at the midpoint of the film and begins to take pride in her new “family”. Russell now wants to tell the truth but can’t, because the horrible lie is now wound way too tight to unravel neatly.

So her alter ego falls in love with him, and he unexpectedly falls in love with her. They have a romantic moment and boom, they make sweet, earth shattering love the likes of which neither have ever experienced before. Clearly, these two are meant to be together all along. At this point, The Missus turns to me and says, without irony:

“That’s so sweet, I love this movie!”

My response was: “So now he’s guilty of kidnapping, brainwashing AND rape? What is this guy, David Koresh?”

The Missus was displeased.

Don’t get me wrong. I understand the point of the story, and the person who wrote the script is the same person who wrote Mrs. Doubtfire and the reboot of Freaky Friday, so a higher than average level of irony was to be expected. I genuinely give the story credit for simply finding a fairly creative way to tell the very old tale of how opposites often attract. The movie’s well enough acted, the leads have good chemistry (and one of them is Kurt Freaking Russell), there are some amusing, memorable supporting players…it’s a harmlessly enjoyable date movie.

Except for the rapey part. Kurt’s character was a carpenter who built something for Goldie, who then refused to pay him. She owed him $600, so he decides to kidnap her, brainwash her into believing she was someone she was not,  and enlisting the help of four children and a former Coast Guard officer to put her into temporary slavery. And since she had no idea who she was (thanks to the brainwashing) – and the “real” her would never have consented to it – when he has sex with her, he basically rapes her.

And that is the basis of a romantic comedy. And I get that it’s s comedy but…dude…that’s fucked up.

I replied, and only half jokingly: “Yes, and it’s also the story of two highly disturbed men who use a cruel but functionally innocent woman as a sexual and emotional pawn. She clearly suffered some mental trauma from this, and in the end (warning: 26 year old spoiler) she reveals to Russell that the yacht and all the money is actually hers, so now Russell’s character isn’t just a rapist, he’s a rich rapist!”

Look, I know it was the 80’s – the decade that made lowbrow racial humor, sexual harassment and Jamie Lee Curtis’ boobs a way of life, but when I imagine this story being pitched today I see a room full of studio executives wrinkling their faces and saying:

Except for that blonde guy in the back, who’s kind of grinning. But let’s get back to my shame. I could tell by the look on her face that she’d never looked at Overboard that way, and the woman who’d just hours before gone on a rant against Howard Stern’s adolescent  misogyny suddenly realized that one of her most super duper favorite movies of all time was little more than a classically elaborate, male dominated rape fantasy. Now, she looks at me with an almost scientific combination of amusement and pity, and says:

“You really can’t turn it off, can you?”

Yes, I got called out and it was okay. It’s what I do. All you have to do is change a handful of key scenes, maybe dye Goldie’s hair black – and you’ve got a Hitchcock film. I’d be more worried about people who watch this movie and don’t see a psycho rapist.

“No.” I confessed, and with a more than appropriate level of sincerity. “No, I guess can’t.”

So there you have it. I’m not lying when I say that in a not insignificant way, I really did ruin this movie a little bit for her. But that just goes to show you, we should have just watched Wrath of Khan, as should we all, when the only other option is a romantic comedy. And here’s a funny aside – Who’s that Girl is her absolute favorite movie ever (I know, right?) and I have already been warned that if I ruin that one for her, they might never find my body.

CRITICULT – Telling you what to think since 2003. Jack Burton Goes Overboard
Loading Comments...