The first time I saw The Evil Dead was on VHS at a house party in high school. That was also the night I finally sealed the deal with that cute girl from band class. Thanks, Sam Raimi! And in the years since that fateful night when I was totally awesome and did everything right, I’ve seen that movie at least five or six times. For it’s day, The Evil Dead was gory and over the top in an innovative, memorable way that endeared both Raimi – and his cinematic soul brother Bruce Campbell – to me for all time. But don’t worry, I’m not a fanboy. I’m just a fan.

I’m not about to launch into some maudlin hyperbole about how I “grew up with” The Evil Dead, or how it somehow changed my life. Okay it DID get me laid, but that’s more of a personal benefit than a professional assessment. I’m just saying that when I first heard about a remake, I was ambivalent. Then, when I heard that original producers Raimi, Campbell, and Robert Tapert were behind it, I was intrigued. But I still wasn’t that worked up about it either way. I stopped getting emotionally attached to the things that entertain me somewhere around 10th grade.

I kept an open mind, and because of that I can say that in my opinion, this version does a far better job of accomplishing what it sets out to do. Raimi’s original screenplay was a directionless mashup of a standard issue exorcism yarn and a lightweight “lost in the woods” story where something unholy takes out a handful of anonymous character archetypes, one at a time. It was a good framework that the script never took the time to really draw out. This time, there’s a compelling reason for five people to be spending the weekend in a shitty, battered cabin out in the swampy woods. That may seem like a trivial difference, but for me it adds a (small) level of depth that wasn’t there before.

And no, depth is not required for a horror movie to be scary. But if you want me to actually give a shit, a little bit goes a long way. 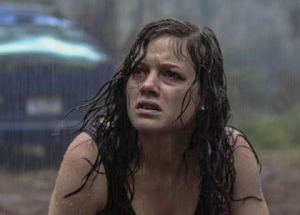 Mia (Jane Levy) is a troubled young girl whose friends have decided to stage an intervention – a last, desperate attempt to help a cherished friend get clean and sober. They’ve also invited her estranged brother David (Shiloh Fernandez), who hasn’t been home since before their mother’s lingering, painful death. Wracked with guilt, David has decided not to short change his sister again. But Mia’s not the only one with an axe to grind. Eric (Lou Taylor Pucci) is quickly identified as a high school teacher, which also makes him the one most likely to open a portal to Hell. But he’s also clearly had a rocky relationship with David. Olivia (Jessica Lucas) is frustrated with Mia’s addiction and has taken it upon herself as an irritating know-it-all and a registered nurse to coordinate the intervention.

Lastly there’s Natalie (Elizabeth Blackmore) who is David’s girlfriend, and is also blond. I cannot deny that the level of depth is small, but at least it’s there. In the original version, half the cast was dead before we even figured out what their names were. And even this film’s thin level of setup proves vitally important when Olivia warns David not to let Mia leave, no matter how severe her withdrawal becomes. That conversation lays the foundation that holds up most of the second act – but it doesn’t take even that long for things to get weird. Within hours Mia has the cold sweats and is babbling about a rancid smell. She’s largely ignored until someone discovers a trap door to the basement, smeared with blood and hidden beneath a grimy rug.

Upon investigation they discover the grim remains of a bizarre satanic ritual – the ceiling is strung with dead cats, and there are signs of a violent struggle involving fire and a shotgun. Among the rubble they discover a book, wrapped in plastic and bound with barbed wire. This is the part where you or I would get the ever loving fuck out, and where most horror movie characters would come up with some inexplicably stupid reason to stick around anyway. But in this case, they have no choice – Mia is still upstairs Trainspotting, and despite everyone’s increasing skepticism of her abilities, Olivia’s medical opinion is that they’ve already come too far not to finish.

So, everyone agrees to ignore the stinking death pit beneath their feet and let Mia ride the dragon back to sobriety. That would probably be the end of it, except that Eric is dying (har) to know what’s inside the dead-cat-murder-basement-barbed-wire book. He pries it open and begins to tinker with it. It’s made of human flesh and partially filled with incantations written in some long dead tongue, but for some reason Eric the High School Teacher has a genius level understanding of languages, and is able to translate them on sight. So of course he reads them out loud, and the next thing you know an evil spirit is unleashed and takes control of Mia. And while you’d think that would be conspicuous, remember that part about her being a whacked out junkie?

Well, it’s almost hilarious how much tweaking and having your soul devoured by the forces of evil look pretty much the same.

As the situation deteriorates and they finally realize what’s happening, the plot fundamentals remain surprisingly relevant – even as blood starts spurting and severed limbs start hitting the floor. Olivia’s hubris gets exposed. Eric’s has issues with judgment and consistently underestimates David – probably because David lets fear cloud his mind at critical times. Mia’s struggle with weakness quickly transcends drugs, because quitting smack is cake compared to being Satan’s personal sock puppet. And of course, Natalie is still blond. No, this isn’t Schindler’s List. But there’s juuuuust enough ballast to keep you wondering (if not overtly caring) who these people are, instead of just waiting for them to die.

This isn’t to say the film is without its low points. It’s definitely inspired on some level by the waning torture porn trend, but I’d say that considering the movie is called Evil Dead, whether the level of brutality  qualifies as “gratuitous” is probably a matter of personal taste. But in every other respect I have no problem saying that I find the retelling of this story to be a satisfying balance between what was, what is, and what can never be again. The same muted playfulness still exists, mainly in the behavior of the invading demons, and an occasional fatalistic quip from one of the exhausted protagonists. And those who believe the original version is “funny” (it’s really not) are probably just missing Raimi behind the camera. Alvarez wisely (bravely?) resists the urge to simply copy his benefactor’s visual or storytelling style.

Yes, a handful of times he does toy a bit with Raimi’s trademark shaky cam and dolly zoom shots. But they generally feel either relevant, or like a tastefully placed homage rather than an attempt at mimicry. The standout of the cast has to be Levy. Some seriously fucked up shit happens in this film and brother, you believe that she has seen it. Fernandez is better than you’re expecting, and comparisons to Bruce Campbell are pointless – this was clearly never meant to be the same character. Across the board the production values are superior to the original, and not just because of the budget. It’s a better screenplay. It’s got better actors. It’s a just better version of the same story, period.

Much better, in fact. But save your hate mail, I’m not done.

I’m not diminishing the significance of the original. Raimi and Campbell were a couple of twenty-something nerds who, against incredible odds, created one of the most innovative, influential and profitable low budget horror films of all time. But the most important thing about The Evil Dead wasn’t the story (which was virtually nonexistent), or the performances (which were largely forgettable). It’s that the film’s success is what allowed Sam Raimi to become Sam Raimi. Without that first monumental success, the groundbreaking, suit wearing geek who made the best (and the worst) Spider-Man movie ever  – might not even be making movies today. And the fact that someone bankrolled a remake, and that it’s doing so well is testament enough.

And once again…it got me laid. Hail to the king, baby.

CRITICULT – Telling you what to think since 2003. Jack Burton’s totally sacreligious Evil Dead (2013) review
%d bloggers like this: