Rama (Iko Uwais) is a badass cop who fears God and loves his family. Every morning before breakfast he says a prayer, beats the shit out of a heavy bag, kisses his pregnant wife and heads to work. By night, he’s a devoted husband and would be father. By day, he’s a stout hearted rookie cop on an elite assault team. He seems like one of those super principled people who see the world in black and white terms; there are Good Guys and Bad Guys. You’ll find none of that “conflicted hero” stuff here, Rama considers himself one of the good Guys. He faces his demons, he tends to his responsibilities, he can’t be intimidated and he can’t be bought.

And in the other corner, we have a suitably disturbed villain, specifically designed to offset all that purity. Enter Tama Riyadi (Ray Sahetapy), a ruthless drug lord who has taken over a thirty story high rise and turned it into his personal drug emporium/death fortress. Tama is the kind of guy who starts his day with a balanced breakfast of Cheerios and also brutally executing a helpless man with a ball peen hammer. Tama and his two lieutenants – Mad Dog (Yayan Ruhian) and Andi (Donny Alamsyah) – back themselves up with a building full of guns and muscle, and they don’t care who they kill or how much of the body is left when it’s over. 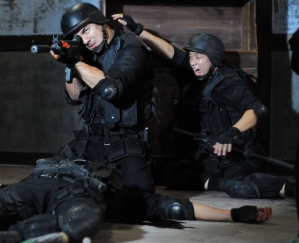 This is what’s waiting for Rama and his colleagues – a twenty man SWAT team, on their way into this shitstorm to conduct a raid. You’ve got a building filled with pissed off drug dealers with black belts and machine guns. You’ve got a van full of heavily armed cops in body armor. And on the fifteenth floor, you’ve got Tama holed up with his henchmen, ready to watch it all unfold on video. That’s all you need to know, and that’s about all The Raid: Redemption tells you before it winds up and kicks you in the solar plexus with chest thumping destruction. After a blink-or-you’ll-miss-it setup, the initial assault goes well, with the cops taking the first five floors.

But things immediately go very wrong and soon a lot of cops are very dead. For the survivors, the question is, do they press forward or fight their way out? For not very plausible reasons I won’t get into, the squad cannot call for backup. So do they complete their mission against now impossible odds, or do they walk away and let Tama win? For now, these cops will live or die where they stand, knowing if they fail, their mangled bodies will probably never be found. It’s not that you won’t be able to guess who comes out on top in the end; this isn’t that kind of movie. It’s that you won’t believe how many incredible ways there are for people to get murdered along the way. 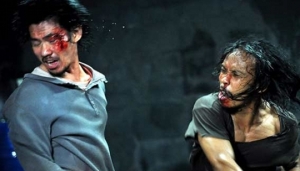 Now if you think that sounds a little like Lionsgate’s Dredd, you’d be partially right. The films have a similar setup, but after fifteen minutes or so, there’s clearly a much different feel to Redemption than there was to Dredd, and their qualities are not interchangeable. While Dredd initially places its characters in a similar predicament, that film relies on a slightly broader concept and a smattering of low level character development to propel the story. Dredd is a fairly straightforward interpersonal conflict between a protagonist who wants to enforce the law, and an opponent who’s determined to defy it. But with Redemption, director Gareth Evans (along with Uwais and Ruhian, who pulled double duty as fight choreographers) has crafted a love letter to martial arts whose structure is sufficient to promote momentum, but isn’t likely to make you wonder about anything more complex than who’s getting their neck snapped next.

So if you’re looking for even rudimentary character development, this movie is not your huckleberry. But it you dig ferociously ultraviolent, genre shattering action set pieces then rejoice – Redemption will kick your ass, and you will enthusiastically thank God for it. This is a movie not about men, but about moral codes that do not change, and cannot evolve. Good takes on Evil inside a steel cage with tables, ladders and chairs, and you get to have a front row seat. During this film you will witness (sometimes literally) off the wall, brain meltingly inventive action sequences sufficient to make The Expendables look like Stomp the Yard. But there’s more to The Raid than shattered bones and ruptured organs (all though there are plenty of those). What really makes scenes pop is Evans’ approach to shooting them. 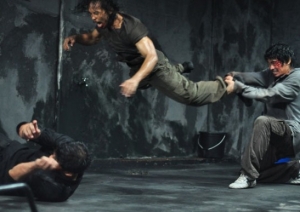 For a cop, the real threat is what can’t be seen, but training can overcome fear. For the viewer, what the eye misses the mind embellishes. Fist and fury, light and shadow, angle and distance are combined to create crisply staged set pieces; clearly the work of people who have great respect for the art of hand to hand combat. The only thing more thrilling than the last fight is an almost intoxicating anticipation for what the next one is going to look like and where it will to come from. The battered tenement is filled with doomed souls who call the damp, bloody darkness their home. And with Tama controlling the game from on high, Rama and his team are trying to extract themselves from the bowels of a building that’s become a virulently hostile living organism.

The Raid is a self described action/horror film, and if you think of it as a haunted house picture – where the ghosts are drug dealers with orders to beat you to death with their bare hands – then you’ve got the vibe. It’s like something Sam Raimi might make if he was into martial arts and had no sense of humor. That’s important to remember, because this is the kind of movie that will either work for you on a visceral level or not. You will either feel the action in your guts or accept that there’s not much more to the story than that, or you won’t. I can, and did, but even so I’ll freely admit this isn’t a movie I’d need to see more than once in a great while.

But even if you only see it once, if you can get in touch with your inner action junkie you’ll find The Raid: Redemption well worth the wait, well worth the ride, and especially well worth the ruthless pummeling your visual cortex will receive in the process.

When some wild-eyed, eight-foot-tall maniac grabs your neck, taps the back of your favorite head up against the barroom wall, and he looks you crooked in the eye and he asks you if ya paid your dues, you just stare that big sucker right back in the eye, and you remember what ol' Jack Burton always says at a time like that: "Have ya paid your dues, Bruce?" "Yessir, the check is in the mail."

CRITICULT – Telling you what we think since 2003. Jack Burton reviews The Raid: Redemption
%d bloggers like this: