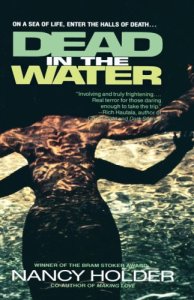 “This is how it will be when you drown.”

Dead in the Water by Nancy Holder is about a ghost ship and the horror that befalls shipwreck survivors who board her. The setup isn’t new but what elevates Dead in the Water is the pitch black execution. Dead in the Water is a harrowing story about trading your soul for what you desire most. It’s a riff on Faust but these characters don’t know they are even making a deal with the devil. It’s about obsession, desire, pain of loss, and being unable to overcome your past and forgive yourself. But it’s also a rip roaring horror story that will keep you up at night trying to finish it and haunt your dreams when you finally put it down.

The tone is set immediately with the prologue chapter that details the chain of events that will lead to your drowning. It is a harrowing but beautifully written piece that ties in to the main narrative and is also creepy as hell. This unease continues to grow as the story begins and we are introduced to the handful of passengers on the ill-fated freighter Morris as it makes its way to Hawaii from Long Beach. Each passenger has experienced loss or is in the process of losing something and its obvious from the start that something is wrong. An accident on board the Morris forces the handful of passengers and some of the crew to abandon the ship. After a while they are saved by a passing cruise ship, the HMS Pandora, commanded by the charming and enigmatic Captain Thomas Reade. Then their nightmare truly begins. You are probably thinking the name of the ship is too on the nose and you normally would be right. But there is a good reason in the book for it and ends up being one of the more riveting passages in the novel.

Nancy Holder uses recurring motifs of drowning, bottles, invitations, circles, and deep water in every way imaginable to drive her themes home. It can get repetitive and exhausting, but to her credit that is how the reader is supposed to feel. This is a mean book, it pulls no punches, and the hallucinatory writing style employed – especially during the go-for-broke bonkers finale – serves to put the reader on edge and keeps them there to the very last sentence.

All credit must be given to Nancy Holder for the spell the book casts over its reader. She deftly juggles existential dread and terror with horrifying gore and nightmare imagery delivering a story that you won’t forget although there are times you may want to. Be warned, this is not a book for the squeamish. The violence and gore is visceral, vividly described, and used effectively. Elements of cannibalism, pedophilia, and sexual mutilation are all touched on as well. The book is more in line with early Clive Barker than Stephen King.

Dead in the Water can be hard to track down, but used stores that sell mass market paperbacks and online can find it for you. Amazon has the paper back for $22 but you can find it cheaper used and the Kindle version is $9.99. I first came across the book in 1996, shortly after release and it has long been one of my favorite books. It was fun to revisit it and I was happy to find it had lost none of its power for me.

Dead in the Water is a twisted and horrifying story that perfectly encapsulates what the Abyss book line was trying to accomplish. Abyss was a small imprint from Dell and was known for cutting edge horror from up and coming writers, especially women. Holder, Melanie Tem, Kathe Koja, and Poppy Z. Brite were among the talented women who got their breaks with Abyss. This link here can give you a history on Abyss as well as a list of several of the novels released on the Abyss line.

CRITICULT – Telling you what to think since 2003. Dead in the Water – Nancy Holder
Loading Comments...